Home Europe Newcastle have ‘made enquiries’ for midfielder but he’s not keen – Sentiment...
SHARE

Newcastle United have ‘made enquiries’ for Roma midfielder Nicolo Zaniolo but need to work to convince the Italian on the move.

That’s according to Corriere Dello Sport, who say Zaniolo has no intention of leaving Italy at this moment in time.

The newspaper explains that the Magpies, as well as Tottenham, have been in contact about the Roma star, and both could ‘satisfy’ the Serie A side’s demands.

In fact, unlike other suitors such as Juventus and AC Milan, they have the money for a deal now, something which is holding up negotiations elsewhere.

Zaniolo is also a problem as he is showing an ‘unwillingness’ to leave Italy, thus ruling out a move to Newcastle at this moment in time.

That’s a sentiment shared by Sevilla defender Jules Koundé, who is similarly not that keen on a potential move to the North East.

Sport report today that Newcastle have tried to ‘torpedo’ Barcelona’s efforts to sign the Frenchman, with Sevilla using them to ramp up his asking price. 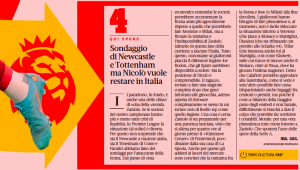 The Magpies ‘want’ the defender and ‘would pay’ to get him, but Koundé has made it clear he does not want the move.

They could use their wealth as a ‘trump card’ in the potential battle with Barcelona, who don’t have the money to match what Newcastle could offer him in personal terms.

The player, though, isn’t keen for now, much like Zaniolo, and both players can be ruled out as possible arrivals at St James Park for the time being.