Earlier today we covered claims from Record that Newcastle United had an official watch Benfica beat Portimonense on Saturday.

The Lisbon side won the match 5-1, and a certain Andreas Samaris started for Benfica. It wasn’t his best performance, and he ended being replaced by Jonas, but at least he was on the pitch to watch.

Given the links with Newcastle during the January transfer window, we explained that it’s very possible the midfielder is back on the agenda for Rafael Benitez’s club.

Another Portuguese newspaper, O Jogo, goes further than that.

They don’t just say it’s a possibility, but report as a matter of fact that Newcastle sent an official to the match to specifically watch Samaris. 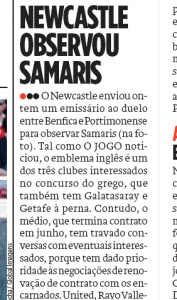 The Premier League club are one of three chasing the player, who will be a free agent in the summer.

Galatasaray and Getafe are named as the other two clubs.

A stay at Benfica isn’t ruled out, and that would be Samaris’ preference, but there’s no new contract yet.