With Newcastle United slowly but very steadily heading towards safety in the Premier League, transfer plans can now be looked at with a bit more confidence.

The uncertainty surrounding the Magpies’ top flight status as they hovered around the relegation zone made it difficult to work out how much money they would be able to spend and the calibre of players they could attract, but remaining in England’s highest tier will make them both richer and more attractive to players around Europe.

Among those could be Takehiro Tomiyasu, as Steve Bruce looks to bolster the centre-back role ahead of the new season.

Il Resto del Carlino in Italy claim Newcastle are ‘interested’ in the Japan international, as the Premier League have ‘returned to concentrate’ on the talent on offer at Bologna.

Not only that, but it’s stated Newcastle sent someone to watch Tomiyasu ‘a few months ago’, which we’ll be guessing was a scout in Italy capable of travelling without crossing any borders. 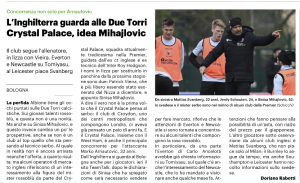 Either way, they aren’t the only ones, as Everton are also interested, which means there could be ‘the possibility of an auction, with a rise in the price for the Japanese’.

Since Bologna might have to sell some players before spending going forward, two Premier League clubs, flush with cash (or at least far more flush than the Serie A side), fighting over one of their most expensive players could be an ideal scenario for them.