Having made a name for himself at Genoa, Mattia Perin joined Juventus with hopes of playing a bit more than he did last season.

Making just nine appearances in all competitions, the 26-year-old warmed the bench far more often than not as Wojciech Szczesny started almost week in week out between the sticks under Max Allegri.

With Gianluigi Buffon now returning after a brief yet failed stint at Paris Saint-Germain, Perin is ‘searching’ for a new option, which could be Newcastle United.

At least, that’s what Corriere dello Sport are claiming on Wednesday, explaining the Magpies are among the clubs ‘on his tail’, perhaps seeing an opportunity to improve on their current choices without breaking their bank. 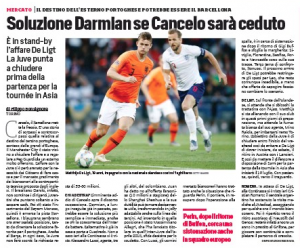 This falls in line with previous reports of Newcastle looking for a new shot stopper, with many reports of an interest in Lazio’s Thomas Strakosha emerging over the past week, whose €40m price tag represents a big obstacle.

Bought for just £10.8m last summer, Perin would likely represent a far more affordable option to supplant Martin Dubravka, but the currently managerless Premier League side will need to fight off some relatively impressive competition.

Sevilla, Benfica, Fiorentina and Porto are all mentioned alongside Newcastle, and with the situation currently as it is at St James’ Park, most of those represent a better project for the goalkeeper.

That could change in the next few weeks depending on who replaces Rafa Benitez, but for now, we find it hard to believe a player like Perin would feel enticed by a move to Tyneside.

Some might, but with a lot of those clubs capable of offering European football (and a manager), even the staunchest Newcastle fan could understand if the Italian chose any of the above over the north of England.