Despite being signed by Rafa Benitez during the summer of 2017, Javier Manquillo hasn’t convinced the Spaniard he deserves a lot of playing time, at least this season.

With just 10 appearances in the league, the fullback has become the club’s utility player, starting and finishing all three FA Cup games this month while coming on for eight and five minutes in the last two Premier League matches against Chelsea and Cardiff respectively.

Following Newcastle’s loss to Watford in the aforementioned cup’s fourth round, the future looks a bit bleak for the 24-year-old, which is where Lazio come in.

According to Corriere dello Sport, Manquillo could end up being an option for the Serie A side for the second half of the season if they cannot get Chelsea to lower their demands for Davide Zappacosta. 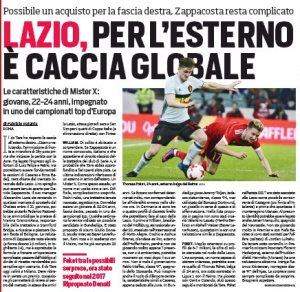 Despite the transfer failing, Newcastle and Lazio recently were in extensive contact for the loan of Jordan Lukaku, meaning the communication channels shouldn’t be too hard to reopen if needs must.

This would definitely be a last minute deal, and with two days left, we’re going to enter that territory very soon.