On Wednesday, we covered a couple of stories about Newcastle’s interest in Daniel Rugani.

The first explained Steve Bruce’s side had ‘joined the race’ to sign the defender from Juventus, with the second pushing the idea the Premier League club could submit a bid between ‘tonight and tomorrow’, meaning at the latest on Thursday.

Well, according to Gazzetta dello Sport, that offer has been made, and it’s a ‘paid loan’, but there is no mention of a view to buy.

They make it sound as if Newcastle United are only interested in the Juventus defender for the current season, and that they’ve joined the race after Valencia. 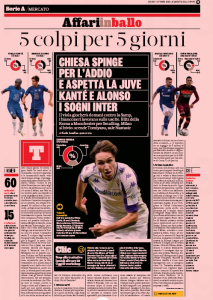 That’s all the information they have on it, but it’s interesting due to the fact that Corriere Torino also had a report on Rugani on Thursday, but never mentioned the Magpies.

They pushed the story that West Ham were in pole position to acquire the former Empoli starlet’s services, and while Valencia were also present in the report, Newcastle were not.

We’ll have to wait and see, but it seems it could be a busy few days for Rugani’s agent.