Less than ten thousand people went to the Estádio Municipal de Braga to see the home side face Boavista for the Portuguese League on Sunday night.

And if the attendance was low, the list of scouts was pretty short as well.

Newspaper A Bola reports that only three clubs went to take notes ‘with chills’ due to the weather. They were Newcastle United, Villarreal and Sevilla.

The Magpies haven’t been linked to a Braga or Boavista player in some time, and the newspaper doesn’t say anything about specific targets for the transfer mission.

The match was just as cold as the weather, as the home side played poorly, and won with a weak 1-0 scoreline. The winner was scored by winger Ricardo Horta in the first half, making the club star the man of the match. 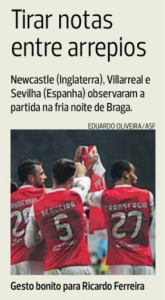 Braga goalkeeper Thiago Sá was also praised by the local press, and for the away side, midfielder Rafael Costa was the only one who stood out.