For a while, some in the Italian media have believed Stefano Sturaro is continually one step closer to signing for Newcastle, and Tuesday is no different.

We might have had to wait until the late afternoon to get an update, and Calciomercato were kind enough to provide one.

The Italian website believe Juventus are ‘about to close’ the deal sending the Italian midfielder to St James’ Park, with the player to ‘be convinced to accept’ the offer from the Magpies.

According to them, Newcastle United will pay the Serie A champions around €15m for the 25-year-old’’s services, which could be seen as a good deal considering he only started seven league games under Max Allegri last season. 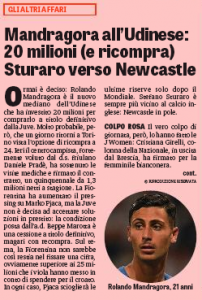 During his time in Turin, Sturaro has made 90 appearances for Juventus, scoring three goals and picking up five assists along the way.

It’s not done, but it’s edging ever closer, which is always a good sign.

To us, it seems Newcastle are the only ones willing to pay that much for him, and while previous reports explained Juventus wanted €18m or so, €15m isn’t a bad compromise considering they’re making a profit for a backup player.

This also corroborates the very brief update in Gazzetta dello Sport this morning, which claimed Sturaro was edging closer to English football.