Yussuf Poulsen has made only one start in the league in 2020 for RB Leipzig and he’s unhappy with his current situation, according to reports.

This week’s edition of SportBild states the 25-year-old is thinking of changing clubs in the next transfer window and has even asked his employer for transfer approval.

The report adds ‘Poulsen wants to go’ and ‘probably to England’, where he is attracting attention from Newcastle United.

Regarding the Denmark international, it’s claimed the Magpies have ‘been interested for some time’ and now Steve Bruce is courting the striker.

Leipzig manager Julian Nagelsmann values Poulsen, but if the Bundesliga side were to receive the right offer, they will sanction his transfer.

With a contract until 2022, the player is valued around €30m and the report adds Leipzig will need at least €30m to let the frontman leave the club. 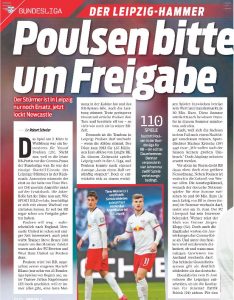 SportBild doesn’t mention whether Newcastle are ready to meet Leipzig’s demands for Poulsen, who has three goals and 11 assists in all competitions this season.

Newcastle’s record signing Joelinton has managed only one league goal in 29 appearances and therefore, it makes sense for them to look for a new striker in the summer.