Despite being a fan favourite at Milan, having come through the youth ranks and worked hard to break into the first-team, Patrick Cutrone was unceremoniously shipped off to the Premier League this summer, with Wolverhampton Wanderers the lucky beneficiaries.

Yanked from preseason training in China to then be sent over to Europe to complete the move, the young forward looked a bit bewildered at what was happening, but now that a few weeks have passed, things are falling into place for him.

He’s yet to start in England’s top-tier, so far coming off the bench against both Leicester and Manchester United, but the new Wolves player seems to be already widely appreciated, as shown by the standing ovation he received when he first entered the pitch against Brendan Rodgers’ side a week ago.

Sitting down for an interview with Gazzetta dello Sport, Cutrone was asked how that felt.

He said: “I was pleased and even a bit surprised. I have just arrived but [the fans] are treating me very well. The atmosphere is really fantastic. I was curious experiencing this environment first hand I must say that what is said around the world is true: the English league has something special about it”. 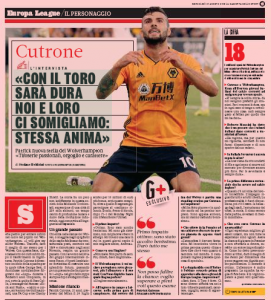 Already learning English and becoming more proficient in the language by the day, the player wants to enjoy of the opportunity handed to him.

He continued: “Every experience improves human beings, but not all experiences are the same. Having the chance to play in the Premier League and not make the most of it would be an unforgivable mistake.

“As I said when introducing myself to the fans, I will give my best to show that I can play here with dignity. The context is excellent. The manager is very prepared. The team wants to do well and I want to pass this exam with full marks”.

Prior to his move to Molineux, the 21-year-old scored 27 goals and assisted teammates seven times in 90 appearances for Milan.