Thursday’s edition of Marca reports Giovani Lo Celso didn’t expect to be in preseason training with Real Betis this week.

When he left the club at the end of last season he assumed he’d be sold before he was due back, and subsequently said goodbye to his teammates.

Therefore, his return has been a little awkward, but he’s getting on with things. He’ll have also have met Nabil Fekir, the man signed from Lyon to be his replacement.

That was never the plan, and a transfer is overdue, with Marca saying it’s due to the lack of an agreement with Tottenham.

Yet still Spurs haven’t upped their offer. Once again it’s stated that there’s an expectation at Betis the Premier League club will go higher than the €50m they’ve already put forward.

Thursday’s edition of AS puts the asking price at €70m, whilst Marca put it at €70/75m, and it’s clear Betis are increasingly aware they’re not going to get the full €75m figure they’ve wanted. 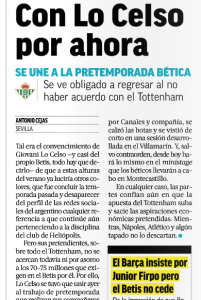 Tottenham and Betis could meet in the middle, with something like €60m plus bonuses seeming reasonable right now.

Napoli and Atletico Madrid are credited with interest, although it’s worth noting the press local to each club isn’t exactly making a song and dance out of this.

With Mauricio Pochettino once again putting the transfer pressure on Daniel Levy, a new offer may be better sooner rather than later.