Barcelona may be closing in on their next sports director with a ‘general consensus’ at the club that Jordi Cruyff should be handed the position, which has been vacant since July of this year when Pep Segura departed the role with Barça yet to find a replacement.

The job was offered to Carles Puyol back in September, but he turned it down, and Mundo Deportivo report that since then ‘everything is kept in the air’.

However, Cruyff has now emerged as a front-runner for the position as he is a name that is well-liked among those who are responsible for filling it.

He left his role as coach of Chinese side Chongqing Dandai Lifan last week, and there is a consensus that his availability, his ‘skills and knowledge’ and the fact he has the Barça philosophy make him ideal for the role.

Mundo explain that the election of a sports director could be significant as it will play an essential role in finding the club’s next manager in the dugout as well.

Ernesto Valverde’s future is unknown, there is an option for an extra year, but that has to be accepted by both the coach and club, and should he leave, the sports director will be ‘fundamental’ in finding the replacement.

Roberto Martinez and Ronald Koeman are two names the club are looking at, and crucially, both managers have a good relationship with Cruyff, so the transition would likely be easy. 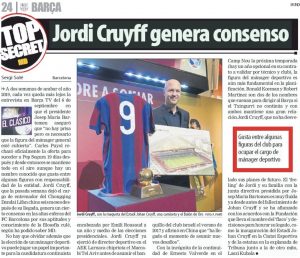 Before then Cruyff would have to accept the position, but that could be likely with the ‘feeling’ between him and the club strengthened by the club’s recent attempts to honour his father.

They have not only named their foundation after him but also the Ciutat Esportiva stadium, while a statue has also been erected outside the stadium and that has gone down well with the rest of the family.