Edging closer and closer without being made official, Alexis Sánchez’s move to Inter remains on the cards before the end of the month as the Serie A side continue to negotiate with Manchester United on a daily basis.

Gazzetta dello Sport report there is still a distance between the two parties, notably on how the loan would be detailed, with the Italians would prefer a ‘dry’ loan, meaning no initial money involved, while the Premier League club want a possible fee up front (around €2-3m).

A ‘new meeting’ in London is expected to take place on Wednesday to try and sort those final details out, as it appears everyone is fine with the €15m fee Inter would have the option to pay to make the move permanent, and United are willing to pay half of Sánchez’s wages for the duration of the loan.

Once again, it’s stated the Serie A club are ‘optimistic’ of getting something done, and are hoping that today is the day they get the green light from Manchester United to transfer the Chile international to San Siro. 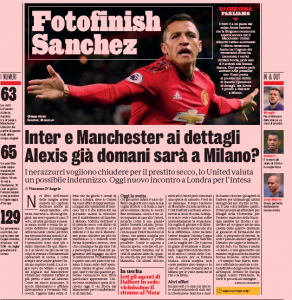 TuttoMercatoWeb also add a few details on Wednesday afternoon, explaining that only €1.5/2m stand in the way of the transfer going through, and that if Inter decide to make the move permanent, Sánchez will sign a contract keeping him at the club until 2022.