After a long battle with AS Monaco about his contract, Hannibal Mejbri eventually managed to free himself from the principality club earlier this summer, in great part thanks to Manchester United, who paid a fee that could reach €10m for his services.

The 16-year-old has signed a five-year contract with the Premier League side, which will start on his 17th birthday, where he’ll hope to integrate the first-team as quickly as possible.

Before that, however, he’ll need to settle in, but thankfully for the youngster, he has at least one familiar face already at the club: Noam Emeran, who signed from Amiens not too long ago.

The likes of Paul Pogba and Anthony Martial will also be there to answer any questions he might have about making the step up and fulfilling his ambitions, which he laid out to Le Parisien in an interview.

He said: “For starters, I’m going to go in the U18s. If I can make it into the first team in two years time, that would be good. The rest depends on me. 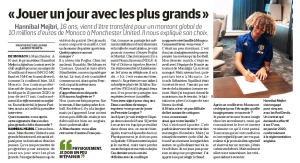 “Physically, I’m going to need to thicken up a bit. If I need to put a foot in, I will, but without losing my technique and my vision.”

Mejbri also opened up about the last few months, which he admits were difficult for him and his family, as they fought hard to free him from his Monaco deal to get this move.

He explained: “It was a bit stressful. It’s a relief to be able to think about football again. My last game was in Paris with the France national team. I’ve missed it.

“On the football side of things, it was going well at Monaco. The manager, Sébastien Squillaci, was happy with what I was doing. I could have used my situation as an excuse, but I’ve always given my all on the pitch. I just let my father deal with all the stuff off it.”

Admitting he has received insults because of the manner of his exit from the principality club, Mejbri now just wants to put all of that behind him and focus on what lies ahead: his new adventure with Manchester United and breaking into Ole Gunnar Solskjaer’s plans.