Jason Denayer moved to Manchester City from JMG Academy in 2013.

He has been away on loan at Celtic, Galatasaray, Sunderland and a second spell with the Turkish club in the last four seasons.

Pep Guardiola allowed the 23-year-old to leave the Premier League winners and he completed a switch to Lyon in the summer transfer window and the Champions League clash between the two clubs will see him return to the Etihad on Wednesday.

Marc Wilmots, the former coach of Belgium, handed the centre-back his national team debut in 2015 after he impressed for the Super Lig side during his first spell with Galatasaray. 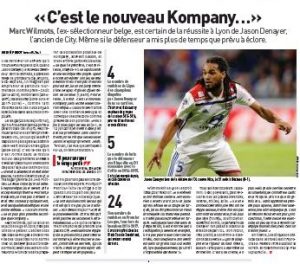 The 46-year-old has suggested that Denayer has all the qualities to potentially become technically better than Vincent Kompany and has claimed the Ligue 1 outfit’s player is now the Manchester City captain’s natural successor.

“His main quality is his speed. He has the power and technique and can still improve his game defensive wise, but is not bad so far”, the ex- De Rode Duivels manager was quoted as saying by L’Equipe.

“He has a good jump and even though he will not be Virgil Van Dijk, because of its size (1,84 m). For the rest, it has it all. This is the new Kompany, without the charismatic leader”, Wilmots added.

The European fixture between Lyon and City will give Denayer an opportunity to showcase his abilities against his former club.