The situation around Matheus Pereira is getting increasingly confusing.

West Brom have been repeatedly linked with the player, initially by the Portuguese media and then in England, and the idea has been they want to sign him on loan.

There’s been some disagreement with Sporting over the structure of a potential deal, and that’s given Schalke the potential to come in and try and get the signing themselves.

Wednesday’s edition of O Jogo reports the Lisbon club have two plans. If they sell Pereira permanently they want €15m, and if he goes out on loan they want a €1m payment for the period and a buying option set at €12m.

That would make one wonder why any club would choose the permanent deal, and perhaps it’s just to make the loan conditions look more attractive for West Brom and others. 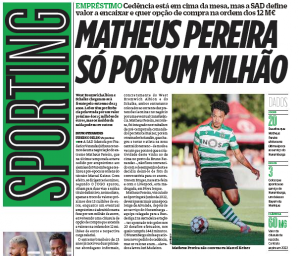 Interest from the Baggies and Schalke is once again backed up by O Jogo, and it’s said both club are aware of the conditions to sign the 23 year old Brazilian.

Pereira has been taking part in preseason training with Sporting, yet it’s claimed manager Marcel Keizer has been left unconvinced by the player, which is why a move is likely.