Recently leaving Sampdoria, Walter Sabatini is expected to become Bologna’s new director of football, and he could already have a few players to deal with.

One of them, according to Gazzetta dello Sport, could be West Ham’s Pedro Obiang, adding yet another club to the long list of interested sides in Italy trying to bring the midfielder back to Serie A.

The aforementioned Sampdoria did their best last summer, to no avail, as did Fiorentina in January, which also failed.

The latest were Roma, around the same time discussions were taking place to hire Paulo Fonseca as manager (he’s now been appointed), but that story appears to have been put to one side for now. 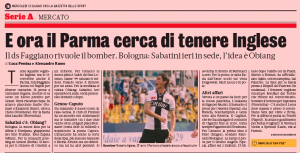 For the West Ham player, a move to a new club is probably best, allowing him to get more time than the 1121 minutes (just over 12 full games) he got in the Premier League last season under Manuel Pellegrini.

As for the Hammers, if they can make some money back on the £5.4m they spent on the now 27-year-old, they will probably be happy to take it.

Obiang is said to be ‘valued’ by the club, which corroborates claims from Il Resto di Carlino from late last week (it slipped through our net), relayed by 1000Cuorirossoblu, that Sinisa Mihajlovic wouldn’t mind working with the Equatorial Guinea international again, having already done so at Sampdoria.

All in all, this makes a bit more sense than a move to Roma where a guaranteed first-team spot would be hard to come by.