Catalan newspaper Mundo Deportivo have a big article on Hatem Ben Arfa on the back page of their Sunday edition.

Why? Well, they want to point out what a talented footballer he is and how everything may not be lost on the player’s career.

An exit from PSG is inevitable in the summer and like others have before, Mundo Deportivo talk up a move to Leicester City.

It’s explained ‘it’s never too late’ for a footballer to reach his potential and despite Ben Arfa being 31 year of age, there’s a hope he could revive his career under his former manager Claude Puel. 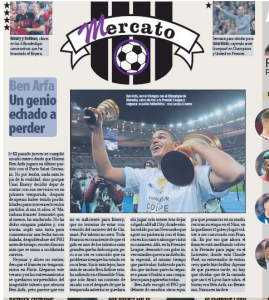 Ben Arfa is said to be considering moving to Leicester City this summer, it’s stated as something on his mind, and that’s all down to the Puel connection.

A lot will depend on what Ben Arfa expects to be paid, because whilst he may be worth a gamble for Leicester, he’s probably not worth a gamble on a huge wage and a 2 or more year contract.