In theory, the Eredivisie club could sell Jorgensen this month as they’ve just signed Robin van Persie. In practice, they will consider a move but want to make a €20m profit on the player.

De Telegraaf report the Dutch club will only sell for ‘an excessive amount’ because they’re not in any financial difficult and if the window closes and Jorgensen remains it’s hardly bad news for them.

Newcastle United’s attempt is ‘not yet taken seriously’. The Premier League club are said to have offered €14.5m, which is some distance from Feyenoord’s asking price of €25m.

De Telegraaf don’t say so, but there’s probably a little room for manoeuvre there, and Newcastle would likely have to go over €20m. 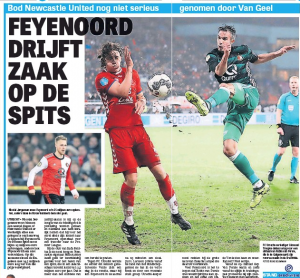 As far as wages are concerned, Jorgensen would double his money moving to Newcastle.

It’s stated the 27 year old would see his wages rise to €2.5m a year if he makes the move to St James’ Park, and it’s accepted the player may be tempted.

The Danish international is said to be aware of the situation, but also calm about it all, not getting too flustered by the transfer attention.