The centre back has been out injured since the Merseyside derby in October, when a rash, ill-timed challenge from Jordan Pickford saw him rupture his ACL.

That injury required surgery, and he’s been recovering since, with it expected that he would miss the rest of the season as a result.

However, the Liverpool stalwart has been making something of a remarkable recovery, with the club recently releasing images showing him hard at work in the gym.

Indeed, Liverpool manager Jürgen Klopp provided a positive update on the subject yesterday, stating that his star man was making good progress but was still a long way from a return.

De Boer has now offered a similar update, revealing that he is hopeful of having the centre back in his team for the upcoming European Championships, having spoken to him recently on Facetime.

“He is busy with so much energy,” he told De Telegraaf.

“If you see what he’s doing… In my time you were only allowed to kick in the swimming pool. 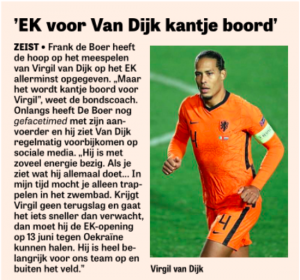 “If Virgil doesn’t get a kick back and things go a little faster than expected, he should be able to make it to the European Championship opening match on 13th June against Ukraine.

“He is very important for our team, on and off the field.”