The Toffees used to be referred to in the Netherlands as ‘the Everton of Ronald Koeman’ and similar, but now it’s very much Marcel Brands, and that opens up the possibility of many transfers.

Brands is hugely respected by the Dutch media, which will now give Everton a presumed advantage in transfer talks. Monday’s edition of AD has a report on Bas Dost and interest from Sevilla, and the Goodison Park club are pulled in.

Dost, along with other players, was recently attacked by fans at Sporting’s training ground and the picture of his subsequent head wound (after reportedly being hit by a belt buckle) quickly travelled around the world.

Unlike Rui Patricio, Dost hasn’t yet made steps to rescind his contract but it wouldn’t be a great surprise if he does. Even if that route isn’t taken, a summer exit is on the cards and the striker’s price is likely going to have to be lower than it otherwise would have been. 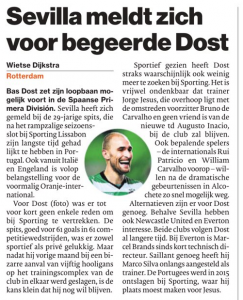 AD say that along with Sevilla, Everton and Newcastle United are also interested, and have been following Dost for a long time.

Marco Silva knows all about dealing with Sporting, and Brands has his excellent Dutch connections. If Everton interest is correct then there’s a reasonable chance of them being an attractive alternative to Sevilla.