Manchester United fans surely believe that Paul Pogba has a special hairdresser. Maybe Daley Blind and Zlatan Ibrahimovic have their right men for the job too. But they couldn’t imagine that Nemanja Matic is the one to have a story about it.

Portuguese newspaper A Bola have a pleasant article today after they interviewed Serbian hairdresser Dragan Stanojevic.

The hairdresser, who’s been living in Lisbon since 1999, has worked with several Benfica players, and made a special friendship with Matic during the midfielder’s time in the city.

Stanojevic only moved to Portugal because of his girlfriend, who later became his wife, and fell in love with Benfica in the first game he watched at the Estádio da Luz.

“I’m crazy about Benfica,” he tells A Bola. “And everyone knows that. When Benfica loses the Sporting fans queue the next day to annoy me. 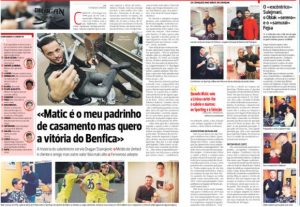 “I started cutting Matic’s hair and we created a great relationship of friendship to the point that he became godfather of my youngest daughter, Luna, and my best man of marriage in the church. I’m very sorry that he did not stay in Benfica. I never forget what Pietra told me when he arrived at the club still unknown in 2011: ‘This is a great player and has the profile to be a Benfica player for many years.'”

Stanojevic claims that he’s given Martic some haircuts which may have played a part in goals: “I cut his hair on the evening of Sporting-Chelsea for the Champions League. Told him he would score. And he scored the winning goal. He dedicated the goal to me, bringing his fingers to his hair, mimicking scissors.

“When he came for the national team, the same thing happened: I cut his hair the day before and he scored against Portugal with a bicycle kick. This had started at Benfica, when a few days before a game with FC Porto I told him: I’ll do you a hairstyle for a goal. And what a goal he scored, with that kick that would come to be nominated for the Puskás award. I was at the Luz and I was falling from the balcony of the cabin during the celebration!

“Still friends. I agreed with him to cut his hair on the evening before the game, but I warned him right away: although he is my best man and godfather of my daughter, I want Benfica to win! I don’t care if he scores as long as my club wins. He understands. He already knows me.”

The interview was conducted a few days ago, but A Bola called Stanojevic to ask if did indeed cut Matic’s haircut on Tuesday. He confirmed it, saying he was called into Manchester United’s hotel to do the job.

He didn’t say if it was a goalscoring haircut, though.