There is a growing trend in Italy right now, which is that Chris Smalling is getting closer and closer to a return to Old Trafford.

On Tuesday, we relayed an article from Corriere dello Sport claiming that AS Roma had six days to find €6m to meet Manchester United’s asking price for their centre-back, and it doesn’t seem like they are going to make it.

That’s because both the Gazzetta dello Sport and the aforementioned Corriere have articles on the matter on Wednesday, explaining the Serie A side will now start turning their attention to new free agent Jan Vertonghen.

The Belgian’s contract at Tottenham has now expired, and the latter of the two newspapers state that, ‘at least momentarily’, Franco Baldini has ‘decided to interrupt’ talks with Manchester United to focus on a potential alternative for Paulo Fonseca. 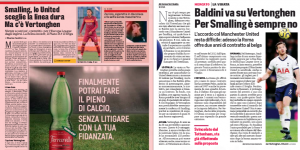 The bottom line is, the Premier League side aren’t interested in another loan, and Corriere, echoed by Gazzetta, write the ‘only possibility’ of Roma getting to keep Smalling going forward is to ‘get closer’ to Ed Woodward’s asking price of €20m.

Since they’re currently on €14m to be paid in three years (courtesy of Gazzetta), they’re some way off that.