Portuguese newspaper Record again push the Andre Carrillo case in their Saturday edition. The team first linked with taking Carrillo from Benfica this summer was Watford, largely because Marco Silva is the manager.

Then Newcastle United and Crystal Palace were dragged into the situation, and they again get a mention on Saturday. Record say that negotiations are still ongoing to try and move Carrillo on this summer, and Benfica are trying to use all their experience to build a deal.

It’s almost certain that Benfica, either directly or via agents, will have contacted Newcastle and Crystal Palace, rather than the opposite. This is a well trodden path for Benfica when they want to move a player on, and even Victor Lindelof and Nelson Semedo were the subject of months of transfer effort before their moves to Manchester United and Barcelona.

Newcastle and Crystal Palace will have been identified as smaller Premier League clubs who could pay Carrillo’s hefty, for Benfica anyway, wages whilst on a loan. They’d also 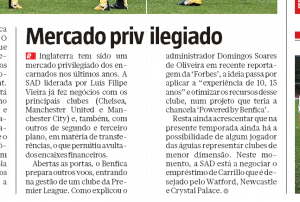 provide a platform, with Carrillo able to get into the team and raise the possibility of Benfica getting a reasonable fee next summer.

Marco Silva will be well aware of how these things work, from his time in Portuguese football, but Rafael Benitez and Frank De Boer may find it odd that Benfica are trying to push Carrillo to several Premier League clubs.