Last week saw claims come from Spain that Tottenham Hotspur are trying to talk Espanyol down on the price of Pau Lopez.

Tottenham took Pau on loan from Espanyol last summer and have a €7m clause to make the deal permanent. Should they choose to send Pau back, and not pay the clause, then Spurs will have to pay the Barcelona club €500k on top of the €600k loan fee already paid.

It was claimed that Tottenham were looking to pay as little as €3m for the player and a sports director at Espanyol was quoted as saying: “I know that Pau Lopez is happy, we do not hear from Tottenham; They know what they have to do, they have to pay seven million and if so he will not be an Espanyol player. The option will not be lowered.” 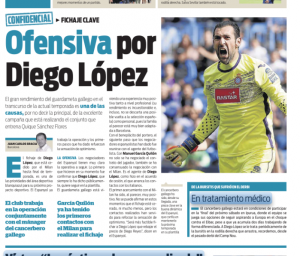 Espanyol would appear to have confidence that any issues will be solved and Pau Lopez will move permanently, because they’ve advanced negotiations to sign Diego Lopez permanently.

Lopez is loan from AC Milan and Espanyol’s plan has been to pay for him with their Pau funds from Tottenham.

Spanish newspaper Sport reports on Wednesday that Espanyol are going further with their Lopez talks, which suggests there’s confidence on Pau to Tottenham.