Home Europe Negotiations ‘advancing, but not closed’ as agent tries to get player to...
SHARE

A new ‘Jorge Mendes puzzle’ is presented by Italian newspaper Tuttosport on Tuesday.

The outlet claims that following the sale of Diogo Jota, the super agent is now looking to fill the winger’s role at Wolverhampton Wanderers with Juventus star Douglas Costa.

Tuttosport writes that Mendes is currently trying to get to a deal, as the Brazilian is now ‘closer to England and further away’ from the Old Lady.

It’s said Juventus have given the green light for Douglas Costa’s departure. The negotiations are ‘advancing, but not closed’ yet. 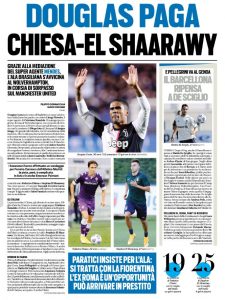 Despite showing confidence that the move could happen, Tuttosport doesn’t bring any further details on how much Wolves would spend to sign Costa.

The Brazilian, who had three goals and seven assists in 29 appearances for Juve last season, is currently valued by Transfermarkt at €20m. His contract with the Old Lady runs until 2022.

Tuttosport claims that ‘in England’, it’s said Manchester United would also be interested in Costa. In truth, those claims have been coming from Italy for years.