Home Europe After negotiating with Barcelona, player ‘does not give signs’ to join them,...
SHARE

In December, we carried a report from Sport, who explained that Barcelona have offered a deal worth €60m to Paris Saint-Germain’s Adrien Rabiot to join them as a free agent in the summer.

The midfielder has decided against signing an extension at Parc des Princes and the Ligue 1 winners’ efforts to offload him in the winter market were unsuccessful, meaning he will join a new club on a free transfer after this season.

It not surprising the Frenchman has received several offers, and today’s edition of Mundo Deportivo reiterates that one is from Barcelona.

However, the 23-year-old still ‘does not give signs’ to join either the Spanish champions or any other club.

Since December, there has been no contact between Rabiot’s camp and Barcelona and after the La Liga winners agreed a deal to sign Frenkie de Jong, they have cooled down their interest in the PSG contract rebel. 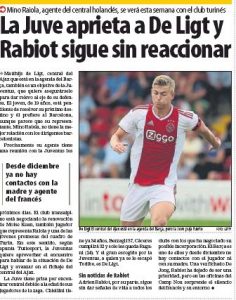 Mundo also claims the whole situation around Rabiot, where he and his environment have decided to stay silent, is ‘surprising’ for the leaders at Camp Nou.