After a week or so of confusion, and another week or so of waiting, Nantes fans got what they wanted, and that is Claudio Ranieri as their new manager.

The former Leicester boss was finally presented to the press by club president Waldemir Kita, and, among all the gushing and praising, a few transfer targets were discussed.

One of them happened to be Aston Villa’s Jordan Veretout, whom Ranieri is a big fan of, having tried to lure him to the King Power Stadium when in charge of the Foxes a couple of years ago. 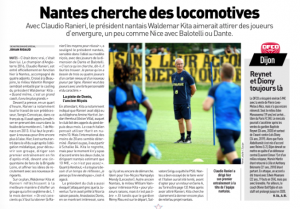 Spending last year on loan away from Villa Park at Saint-Etienne in Ligue 1, you would think that another return to France this year to avoid the Championship would be an opportunity the Villain would relish, but that doesn’t appear to be the case.

L’Equipe, who have a summary of Monday’s press conference in their Tuesday edition, explain Nantes have been phoning Veretout for the past two months or so in order to try and convince him to join, but to no avail.

Regarding the Aston Villa midfielder, Kita said: “He still needs time to think, but I don’t think he’ll come”.

To a certain extent, that’s understandable.

Having left the club that helped him develop to go to the Premier League, returning there just two years later could be seen as a step back in his career when all he’s tried to do is go forward, even when Aston Villa were relegated.

There is also the option of him staying in the Midlands next year, if Steve Bruce can convince him to do so, but with rumours the Villains are trying to recoup €8m for him, that seems unlikely.