Finally, after a 16-year wait, Leeds United are back in the Premier League.

It wasn’t easy, there was heartbreak along the way, but thanks to Marcelo Bielsa and the management of Andrea Radrizzani, the club will return to England’s top-tier, where many feel they belong.

This rise from the depths of the Championship to the elite happened fairly quickly after the aforementioned Italian businessman purchased Leeds from Massimo Cellino and turned things around very quickly.

How did he do it? He told Gazzetta dello Sport: “Visions, strategies, investments. Between the purchase of the club and the players, the expensive was £100m. Now, the club is already worth £300m. In three years, we have doubled our revenues and the promotion to the Premier League guarantees £200m”.

This could have all happened sooner, but a loss to Derby County in the promotion playoff following a blip in form at the wrong time meant Leeds fans would have to wait an extra year before revelling.

However, Radrizzani explains they learnt a lot from that process and feels it will help them maintain their status next year on first attempt.

He said: “The elimination in the playoffs was a blow, but we remained consistent with the project. We managed to reinforce the team by selling to respect the FFP rules. Not having gone up last season taught us to manage the difficult periods, and this will be an extra weapon in the Premier League”. 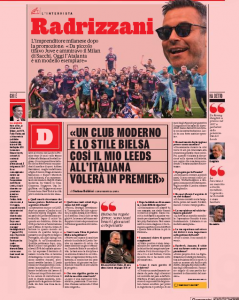 Looking to emulate the likes of Leicester City, Wolverhampton Wanderers or even Brighton & Hove Albion by establishing themselves in the elite after just one season, Leeds will be hoping to do so with Bielsa as their manager.

But what made Radrizzani turn to the Argentine in the first place when he was looking for a new manager?

He explained: “I wanted someone who could change the culture of Leeds in depth. We needed a football teacher who would give an identity and an attacking game. The Bielsa method is a way of life. The bases are the discipline and a system of values that need to be met.

“The rules are ironclad and military, starting with the daily weight check. You must give the players recognition for adhering to the project”.

That they did, and look where it got them.

We’ll have to wait and see regarding Bielsa’s future, as his contract will be up once the season ends, but it would be very strange if the Argentine decided to leave straight after getting the club promoted.

Then again, it wouldn’t be the first time he left midway through a project.