Home Europe Nayim gives his advice ahead of Tottenham match, and talks about club’s...
SHARE

One of the few players to feature for both Tottenham and Barcelona in his career, Nayim was the ideal man for Mundo Deportivo to interview ahead of Wednesday’s game between the two sides in the Champions League.

Arriving in 1988 when Terry Venables was in charge at Spurs, the midfielder spent five years at White Hart Lane before moving back to Spain with Real Zaragoza.

Enjoying his time in England playing alongside the likes of Chris Waddle, Paul Gascoigne and Vinny Samways, the now 51-year-old even has his own chant, ‘Nayim, from the halfway line’, which actually describes a goal he scored for Zaragoza after his time in London against Arsenal in the 1995 UEFA Cup Winners’ Cup final.

Asked about the club, Nayim emphasises the fact it is one of modest origins, which was mirrored by White Hart Lane, a relatively small ground where ‘the crowd were on top’ of everything. 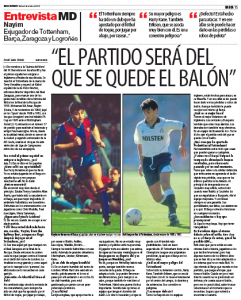 Now playing at the much less atmospheric Wembley while their new stadium gets finished, the former Tottenham man feels the stadium’s dimensions could favour Barcelona if they’re allowed more of the ball.

As for Spurs’ biggest threats, it was a no brainer: “Especially their striker, Harry Kane. Christian Eriksen, too, who works well with him. He moves incredibly in the middle of the pitch, dominates it and assists. That connection is dangerous.”

Unfortunately for Nayim, the Dane has been ruled out of the clash, as have Dele Alli and Mousa Dembélé among others.

Where Tottenham will need to be wary is in midfield, as he warned his former side their attacking mentality could prove costly if they lose the ball too high up.

Nayim simply sees it as ‘whoever has the better possession of the ball’ will win.