Home Europe National teammate to be used as bait to attract Tottenham players to...
SHARE

Italian newspaper Tuttosport brings a big story this week about how Romelu Lukaku could help Inter Milan bring new players to the club.

The Nerazzurri have been targeting two Belgians who are the striker’s teammates with the national team: Toby Alderweireld and Jan Vertonghen.

Lukaku could use his friendship with the two defenders to bring them to Italy, since both of their contracts with Tottenham Hotspur are expiring next summer.

Despite this good plan, there isn’t a big confidence about their will to move to Inter Milan. 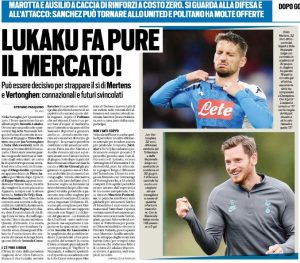 Especially regarding Vertonghen, Tuttosport claims Inter Milan have been in touch with his entourage for a while now. But things would’ve been easier had Mauricio Pochettino stayed at the Spurs, since the belief is that made a renewal less likely.

José Mourinho’s arrival is seen as a sign that the two players could be more motivated at the London side, and could have new plans for their future in case things go well.

So Lukaku may try to help Inter Milan, but the Portuguese boss will have a big influence on the duo’s decisions as well.