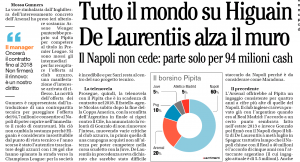 Il Mattino, the regional newspaper for the Naples area, have a report in their Wednesday edition on Gonzalo Higuain and Arsenal.

They say it’s a story which has been going on for some time, with Arsenal wanting Higuain before he moved to Napoli, but obviously not moving decisively enough when it came to doing a deal for the striker.

Once again it’s stated Napoli want €94m in cash. Higuain has a clause, which Gazzetta dello Sport reported yesterday had expired for this year, but it’s still €94m cash.

That doesn’t mean Napoli expect Arsene Wenger to turn up with a lorry load of Euros, it’s to explain that the payment would have to be in one go. The Italian club, according to Il Mattino, aren’t interested in staged payments over several years.

Given all of this… Il Mattino don’t think there’s a big chance of it happening. Indeed they’ve produced a percentage wheel, a favourite among Italian newspapers, and Arsenal get just a 20% chance.

Staying at Napoli is put at 60%, a move to PSG 10%, Juventus 5% and Atletico Madrid 5%. It’s just a fancy way of Il Mattino saying, that in their opinion: It’s not happening.