Losing 3-1 to Juventus at the weekend, Carlo Ancelotti’s Napoli don’t have the time to dwell on the result too much, as they have to prepare a tough Champions League game against Liverpool.

The Serie A side, who drew their first game of the group stages away to Craven Zvezda, cannot afford another set back if they are to qualify for the next round, meaning a win at home against Jürgen Klopp’s men is imperative with two fixtures against Paris Saint-Germain around the corner.

That’s why Gazzetta dello Sport report on Monday that Carlo Ancelotti could end up rotating a few of his players against Liverpool, in a positive way.

With Elseid Hysaj struggling against Juventus, the Italian newspaper believe there’s a good chance Kevin Malcuit, who arrived from Lille over the summer, could be thrown into the mix to try and keep Sadio Mané and Mohamed Salah at bay. 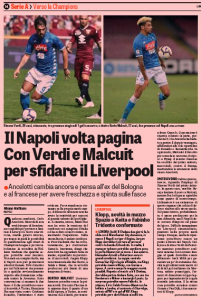 On top of that, Simone Verdi, who remained on the bench at the weekend, could also be used as his manager appreciates his ability to shoot with both feet, keeping defenders guessing when on the attack.

We’ll have to wait and see if these changes are implemented, but after the struggles at the weekend, and a similar opponent in Liverpool midweek, Ancelotti knows the same mistakes cannot be repeated.