Manchester City are one of the clubs interested in Frenkie de Jong of Ajax.

Earlier this month, we covered a report from Mundo Deportivo, who claimed the Premier League winners have already informed the 21-year-old’s employer they are ‘willing to exceed €70m’ to get the Dutchman’s signing done.

Barcelona are another club after the midfielder’s signature and today’s edition of the Catalan newspaper mentions that Ernesto Valverde’s side are aware of what has been reported in the Netherlands regarding their transfer target.

The Eredivisie side’s sporting director, Marc Overmars has received a ‘mysterious’ offer of €70m for De Jong. Officially, the name of the club is not disclosed, but unofficially, it is claimed to be from the Etihad outfit.

Mundo reports that the Spanish champions believe it is from Manchester City and are aware their director of football Txiki Begiristain made the offer as the English club’s CEO Ferran Soriano ‘moves fast’ for the Ajax star. 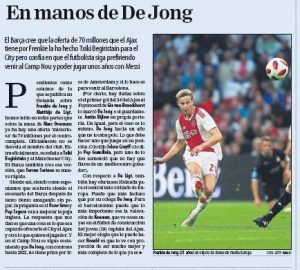 It is too early to even predict where De Jong will end as this saga is likely to continue until the next summer window.