AC Milan were lauded when they took Jens Petter Hauge him from Bodø/Glimt last summer.

The winger had to wait until the start of this year to make his debut in the league against Juventus on January 6th, and he has had two more starts in the Serie A since then.

Lack of regular opportunities in the first few months at the San Siro saw him emerge as a target for Southampton in the winter market.

On February 3rd, we covered claims made by Calciomercato that explained the Saints, Bayer Leverkusen and VfB Stuttgart made a loan approach for the 21-year-old.

It was also explained Milan chief Paolo Maldini ‘never considered’ the proposals made by the three clubs and said no to them.

Thursday’s edition of Gazzetta dello Sport also explain the Premier League side and Bayer Leverkusen wanted to take the Norway international on a temporary deal in the recently concluded window, but Milan ‘sent them [proposals for Hauge] back to the sender’.

In other words, Stefano Pioli’s side turned down loan offers made by Southampton and the German side. 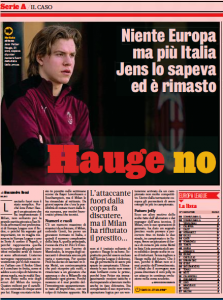 VG have looked at the multiple claims made in Italy about Milan turning down loan offers from the Saints and the Bundesliga club.

According to them, the Italian side have ‘not received any bids’ for the player.

“It’s because he’s not on the market. If we had been open to loaning him, the clubs would have been in line,” an unnamed source from the club told VG.