Three days later, the same newspaper explained the Red Devils are ‘very serious’ about the 17-year-old and their ‘first offer’ of €100m was turned down by the La Liga winners.

Over the weekend, The Sunday Times carried a report discussing a United offer worth around €150m for the Spain U17 international.

Sport again had a report on Tuesday, explaining the Camp Nou side are referring to the teenager’s €170m release clause after United reportedly submitted another proposal for him.

Ever since the saga started, Mundo Deportivo have largely remained silent, until today.

The Catalan newspaper takes a look at the claims made in Spain and England regarding United’s ‘mammoth offers’ for Fati. 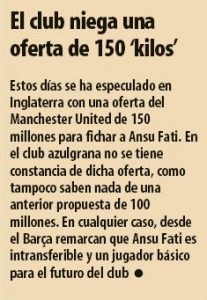 Mundo wasted no time in explaining that Quique Setién’s side are not aware of receiving a proposal worth €150m from United or rejecting a €100m bid from Ole Gunnar Solskjaer’s side for Fati.

The report further stressed the youngster is ‘non-transferable’ for Barcelona and they view him as player for the future.