Home Europe ‘As much as I wanted to give my enemy a Christmas gift’...
SHARE

The official was very upset with the way West Ham reacted to the end of negotiations for William Carvalho, who despite wanting the move, had to remain at his club due to the lack of an agreement.

Those who don’t follow Portuguese football may not know how agressive can Bruno be, and to contradict the Lions after the failed negotiation was basically to ask for a public fight.

Now that the president has his media war, he gave an exclusive interview to Sporting TV, where he could say whatever he wanted about West Ham.

“And the president is very happy with the manager who was the person who really wanted William, the man wanted so much to give the player the manager as much as I wanted to give a Christmas gift to my enemy, He didn’t want to give anything! These messengers, these offended virgins, the president of West Ham… We must tell the truth!”

“To get an idea of it, on the last day of the market William’s father came in all excited to Sporting’s SAD (HQ) and said they would get two offers. One day, if I have to, I’ll tell what he said. We, at a certain stage, since we were already tired – we were 12 people in SAD – we called the lawyer and asked if there would be an offer and he said ‘if you are tired it is best to go home because in my opinion no offers will come’. And it didn’t.” 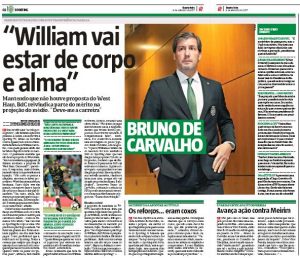 Speaking of William, Bruno recalled how he was the one who gave him the chance to play for Sporting, and claimed that the midfielder ‘owes him his career’.

“I am absolutely certain that there are two things that guide William: First: he is a professional, he knows that it is a World Cup year and that this event is a tremendous showcase, and he is a Sportinguista, so he has to have the body and soul in the club. I’ve also been president for four years and I’m super sad that I have not yet been a champion. Secondly, I’m sure that William always comes to a transfer window and knows that he owes his career to me. I don’t like hypocrisy.”

All neutrals will hope the fight between West Ham and Sporting continues for a long time yet. Slaven Bilic and those in charge at West Ham? They’d probably rather it now went away.