Home Europe ‘He is Mr. €80m’ – Player has ‘attracted the attention’ of Liverpool,...
SHARE

Liverpool have shown an interest in Sporting star Pedro Goncalves, but will now have to pay a top price to sign him.

That’s what Record report today in their piece titled ‘He is Mr €80m’ which explains how the highly-rated youngster has just signed a new deal that should ward off any interest in him for the time being.

Goncalves is one of the rising stars of Portuguese football after playing a key role in Sporting’s title win last season, racking up 23 goals in a highly impressive campaign.

That’s the kind of form that doesn’t go unnoticed and hasn’t, with several of Europe’s top sides all noticing him.

Liverpool are among those keen, with it stated they are one of several clubs that Goncalves has ‘attracted the attention’ of.

Unfortunately for them, Sporting have not rested on their laurels and got the youngster signed to a new until 2026 that has seen him increase his wages and the release clause to boot. 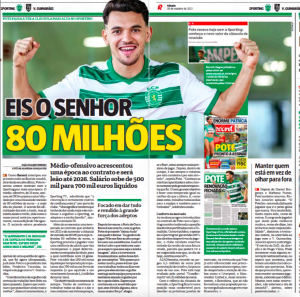 That figure was €60m but has now risen to €80m, a ‘reinforcement’ that will leave Sporting in a ‘more comfortable position’ when it comes to the transfer window.

In other words, they can now point to the €80m clause and tell clubs to match that, knowing they have their star man locked into a deal that very much favours them.

Whether Liverpool would ever pay such a fee isn’t known, but the next time we see them linked, we know that’s the figure they’ll have to be talking about if they want to get him.