If you had told Manchester United fans there was a concrete chance they would start next season with Paulo Dybala in their squad, laughter would probably have been their response.

Yet, here we are, a week away from the end of the Premier League transfer window, and some see the possibility as edging towards reality.

Returning early from his holidays to sort out his situation, Dybala should come to a decision about his future sooner rather than later, especially now that ‘he knows he is more wanted by the Old Trafford club than his current employers’, according to Gazzetta dello Sport.

As has been widely reported over the past 48 hours, Thursday is the day the Argentine will sit down with both Fabio Paratici and Maurizio Sarri, but that talk seems more out of desperation than anything else.

It’s stated that, after all, everyone already knows everything, and ‘Juventus aren’t a team who easily change their mind when it comes to their transfer strategy’.

Gazzetta almost see the chat as futile, believing that all Dybala will learn is the reasons why he’s being pushed aside for Romelu Lukaku, to which he will reply moving to the Premier League isn’t a ‘priority’ for him, preferring to continue in Turin.

It’s said that even Sarri, who actually quite likes the Argentine, will find it ‘difficult’ to ‘turn the situation around’ as he ‘cannot ignore the arrival of a great striker’.

The ball is firmly in Dybala’s court, and Gazzetta explain the ’simplest solution is the one that already seems written’: to accept United’s offer at the right conditions, say goodbye to Juventus and to start a new life without his number 10, without the black and white shirt and without Champions League. 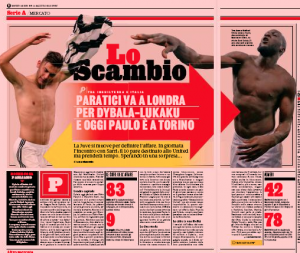 It’s believed the forward will ‘at least take a couple of days to think about it and see if there are alternatives’, like Paris Saint-Germain, a ‘more appreciated yet improbable option’.

Gazzetta write that ‘at this moment, it’s as difficult to see an offer arrive from France for Dybala as it is to think of a different solution to Manchester’.

Seeing as both parties value their players similarly, there shouldn’t be too much problem in settling matters at club level.

As for the players, Lukaku will earn €9m/year net bonuses included, while Dybala has asked Manchester United for €10m/net (£175k/week after tax)

However, and it’s a huge one, things are very, and we mean *very*, different over at Corriere dello Sport.

For them, Dybala is clear: he does not want to go to Manchester United, having said no to the move. 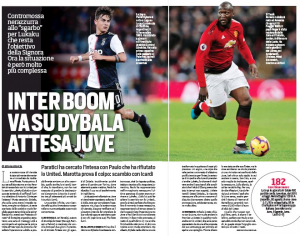 It’s also stated the Premier League club ‘seemed frightened’ by some of the figures demanded by the player’s entourage.

Then, they throw the biggest curveball we’ve encountered so far, claiming that Inter have entered the mix, interested in a swap deal involving Mauro Icardi and Paulo Dybala.

The idea is to tug on Sarri’s heartstrings, as he loves the former Sampdoria striker, which would also prevent Juventus from getting Lukaku (Conte’s favoured option).

This whole thing is very much presented as a ‘revenge’ option for Dybala, allowing him to stick two fingers up at Juventus for trying to force him out of the club all the while giving Inter the chance of getting rid of Icardi and putting a spanner in the Serie A champions’ attempts to sign the Belgian in one swift move.

Could this really happen? It seems extremely far fetched, but it’s a situation that could end up pleasing everyone except Manchester United.