Marca reported on Friday that Dani Ceballos’ desire to make it to Luis Enrique’s Spain squad for Euro 2020 has convinced him to terminate his loan deal with Arsenal.

It was also explained Valencia are ready to take the Real Madrid owned player on loan for the rest of the season and Los Ches met with the midfielder’s agents on Thursday.

In his pre-match press conference on Friday, Mikel Arteta urged his compatriot to fight for his place at the Emirates.

Saturday’s edition of AS once again talks about Valencia being the ‘most interested’ club for the 23-year-old, and the option to join Albert Celades’ side ‘seduces’ Ceballos.

However, the newspaper adds a move away from north London in the winter market remains difficult for two reasons.

The first being Arsenal’s reluctance to allow Ceballos to leave as his exit will force them to bring in a replacement, which the Gunners don’t contemplate at this moment. 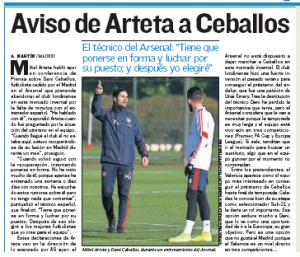 Real Madrid, on the other hand, don’t want the player to join Valencia, who are their rivals in three competitions.

Lots of hurdles to jump, then.