Remember that time when Edin Džeko was really close to a move to Chelsea? Well, he’s now of interest to another London side, as José Mourinho wants him at Tottenham.

At least, that’s what Corriere dello Sport are reporting on Tuesday, corroborating claims from England that the Portuguese wants the Bosnia international in January to bolster his attacking options for the second half of the season.

It’s stated Tottenham have ‘contacted his agent’, with a ‘few signals’ also reaching Roma’s transfer people, but the door has been ‘suddenly shut’, at least for the upcoming transfer window.

Džeko is an ‘irreplaceable player’ for Paulo Fonseca in Italy’s capital, and after fighting Inter off in the summer, they are going to make sure the 34-year-old stays until the end of the season, at the very least. 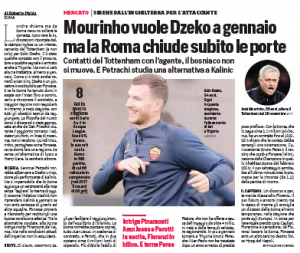 With Mourinho looking for a ‘luxury alternative’ to Harry Kane, to give the Englishman a bit of a break at times, Corriere explain the former Manchester United manager will have to ‘look elsewhere’.

Claim West Ham could offer Balbuena to help them get signing...