Real Madrid have four French nationals in their squad and four more on their technical staff, which includes Zinedine Zidane.

Today’s edition of AS’ discusses Zidane’s French revolution at the La Liga club and one of the key players is Raphael Varane.

The defender has been linked with a move to several clubs over the years, including Manchester United, and the Spanish newspaper gives further insight into the Red Devils’ 2016 interest in the centre-back.

José Mourinho was appointed as manager at Old Trafford in 2016 and in his first summer transfer window, he wanted to bring the player to the club. The Portuguese tactician had managed Varane when he was in charge at the Santiago Bernabéu.

However, Los Blancos manager then ‘convinced’ his compatriot not to leave the La Liga giants. 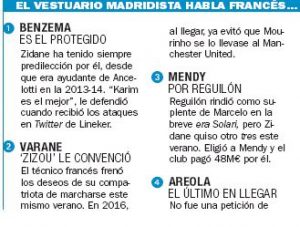 That summer, the English side ended up bringing Eric Bailly from Villarreal and the Ivory Coast international has struggled with injuries at Manchester United.

Bailly was Mourinho’s first signing during the manager’s two-and-a-half-year spell with the 20-time English champions.