Home Europe Mourinho speaks about having to insist to Glazers that Man United is...
SHARE

Manchester United manager José Mourinho has given a big interview to Portuguese newspaper Record on Wednesday.

The four-page chat was mostly about Portuguese football and all the controversies the big clubs have been living in the country, especially regarding presidents and managers.

Even though the interview had been made before the violence at Sporting’s training centre, the club was mentioned a lot during the talk, because of the way president Bruno de Carvalho handles things there.

Carvalho is well known for being present in places where other club presidents wouldn’t be, like the dressing room or the bench during matches.

Mourinho has spoken a little about it, claiming that in England, things are completely different, as there are no ‘president-supporters’ in the country anymore. 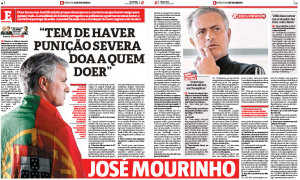 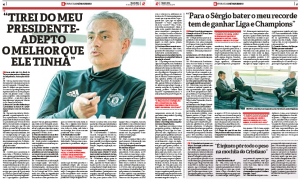 “President-supporter likes to be in the dressing room? Fantastic. But… here I talk! I have an opposite situation with one of the owners of Manchester United.

“We were in a hotel during pre-season, and he was there, too. He wanted to have dinner with the team, but didn’t to disrespect the  manager.”

This seemed strange to Mourinho, who made a point of telling the unnamed club chief that the team was his, not the manager’s.

“I went to ask him: ‘Can I have dinner with YOUR team?’ In Los Angeles something similar happened to the Glazer brothers and the rest of the family. They wanted to see the training session, but it was behind closed doors. ‘Can we go and see the training’, they asked me. I asked, ‘Can I train your team?”

“Of course, the team is theirs. I think common sense, communication, without ego fights, anything is possible.”