The Special One was asked about the Benfica loanees at Spurs, and didn’t hide the plans he has for each of them.

As we covered earlier today, the coach admitted that midfielder Gedson Fernandes could return to the Eagles in January.

Now regarding Carlos Vinícius, José Mourinho claims that the Brazilian should get many more chances to convince at Spurs.

“Vinícius will play many times, he will have the opportunity to prove himself in the Premier League and to convince Tottenham to buy him. If not, he’ll return to Benfica much richer and much more accomplished. This operation is good for all three parties,” José Mourinho told Sportv (via Record). 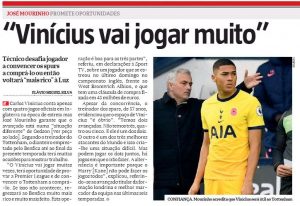 “We have two strikers. We don’t have three, four or five. And he’s one of the two. The other is one of the three best strikers in the world and that creates a difficult situation for him. But you can play the two together, there are games where they’ll do it. Alternation is important because Harry cannot do all the games.”

Carlos Vinícius has six appearances for Tottenham so far, and despite making two assists, he’s still to score a goals for the club. He made his Premier League debut in the match against West Brom last weekend.

Since his loan only expires at the end of the season, there’s plenty of time for him to turn things around, especially with the encouragement coming from José Mourinho.

Tottenham would have to spend €45m to make his move permanent, or negotiate a lower fee.