Home Europe Mourinho to move ‘seriously’ for player – Tottenham will to return with...
SHARE

Things have changed a lot for Paulo Dybala in the past few months. The Argentine attacker was on the verge of leaving Juventus in the summer, and now his wish to stay is making headlines in the Italian press.

Despite being heavily linked to the likes of Manchester United and Tottenham Hotspur, his stay at the Old Lady ended up working well, as he has seven goals and three assists this season so far.

Now Tuttosport not only claims that he wants to stay, but Juventus are also keen on protecting him with a new contract.

But the end of their story brings a club who could still make an effort to sign him soon, and that’s Tottenham. 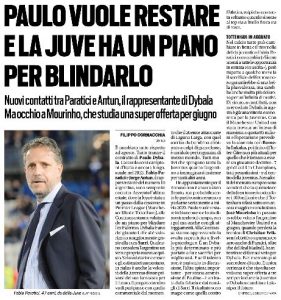 It’s claimed José Mourinho had already tried to sign the player for Manchester United in the past, and if he loses Christian Eriksen, he would move ‘seriously’ for Dybala.

Tuttosport says Tottenham would try the transfer with ‘more conviction’ this time, and to take him from Juventus, a ‘super offer with three zeros’ is required.