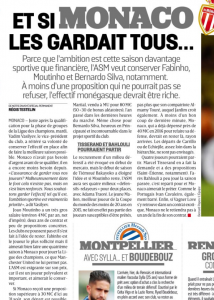 Manchester United have been linked with a move for Brazilian right back Fabinho in recent weeks. It’s not the first time the possibility has been reported and Fabinho appears to be one of those players who will enjoy Old Trafford links repeatedly.

However, there haven’t been any reports on any offers being made yet, but it’s claimed Jose Mourinho maintains a keen interest in the AS Monaco defender.

According to French newspaper L’Equipe on Thursday, AS Monaco are keen on keeping their best players in the squad after qualifying for the group stages of the Champions League.

Fabinho is also reportedly keen on staying at the Ligue 1 club as they play in the Champions League, and Manchester United don’t. It’s not too hard to believe that if Jose Mourinho did make a move that Fabinho would soon be prepared to wait a season for Champions League football.

L’Equipe, however, don’t rule out Fabinho’s departure, and they believe a €30m+ offer before August 31st could be enough to tempt AS Monaco. The French newspaper believe that would present an Anthony Martial type situation for Monaco.

Vadim Vasilyev, vice president of AS Monaco, has also failed to guarantee that the club can keep all their key players.

He said: “Insurance to keep all our players? Unfortunately, in football it does not exist, but we thoroughly reinforced.”