A regular under Frank Lampard this season until the back end of the pre Covid-19 campaign, Kurt Zouma has enjoyed a good season at Chelsea.

That being said, the 25-year-old wouldn’t mind trying something different, with Tottenham among those ready to give him a chance.

This is what L’Equipe are reporting on Wednesday, explaining that Zouma would like to stay in England if he left Chelsea, wanting to continue his development and cement his role in the France national team while discovering a ‘new context’.

Their question is in which club, and two immediately stand out.

The first is Tottenham, as L’Equipe point out Zouma ‘has always appreciate the work methodology of José Mourinho’, and it goes both ways.

It’s stated the manager and the player have never lost touch since his departure from Chelsea, and the Portuguese would welcome it if Daniel Levy could acquire the centre-back, looking upon such a transfer ‘favourably’.

This backs up previous claims from RMC Sport that Mourinho had given Zouma’s name to those in charge at Spurs for a summer transfer. 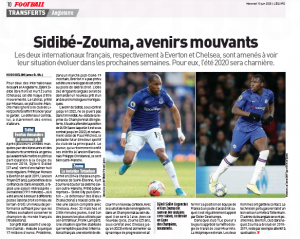 The second is Everton, who are in need of a new centre-back.

Zouma knows the club well, having spent a successful season on loan at Goodison Park, and L’Equipe point out Carlo Ancelotti’s side are ‘staying attentive’ to the player’s situation.

Few details are given about what a transfer would entail in terms of fees and wages, but since the France international is under contract at Chelsea until 2023, it likely won’t be cheap.