Attending to the ANTF Forum this week, the Special One was happy to speak to the Portuguese press about several topics, except for Manchester United, of course.

And when asked about the clash between the Dragons and the Reds, he says Porto shouldn’t make the same mistakes they made last year, when they were eliminated by Liverpool in the round-of-16 with a 5-0 defeat at the Estádio do Dragão.

“FC Porto have a chance to win and go through,” said Mourinho (via Record and A Bola). “Compared with last season, I think Sérgio Conceição will ask himself questions about what happened in order to do something different this time around.

“The tie is open and what happened last year, I believe, can play for Porto in both games. Liverpool have an absolutely fantastic individual quality. They are disputing the league title, which means that in the previous game or between the two games, they will not rest players.” 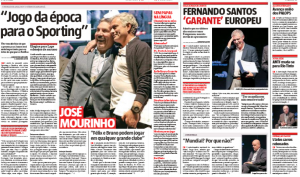 José Mourinho has also spoken about his future. He claims he’s still not ready to take charge of a club, but plans to accept a job to start the 2019/20 season working. He’s also not ruled out training the Portuguese national team, even though he has no intention of stealing Fernando Santos’ job for now.

“I think people care more than I do! I decided not to train until the start of the next season, and even then, to return at the beginning of the next season, it has to be in a club and a competition that motivates me. I’m not in pain because I’m not training. I have time to think of other things. I won the right to choose a project that I want, but I admit that I would like to come back next season.

“I never hid that I wouldn’t like to finish my career without training the Seleção, but Fernando shouldn’t worry (laughs), I am not thinking about now nor in the next times. We’ll see if the opportunity will come.”

“I would like to try to win a third Champions League with a third club and win a fifth league in a different fifth country. But you don’t always have what you want.”

That suggests the former Manchester United manager could be looking to manage in a league where he hasn’t yet worked.