Everton completed the signing of Yerry Mina from Barcelona on deadline day for €30.25m plus variables and the La Liga winners have inserted a buyback option as a part of the deal.

Prior to his move to Goodison Park, Manchester United and Lyon were also interested in the defender. We covered a report from Sport on Thursday, who claimed the Red Devils had increased their proposal for the Colombian international.

Friday’s edition of Catalan newspaper claims the Red Devils failed in signing the centre-back because the 20-time English champions were trying to sign the former Palmeiras man for a ‘figure significantly lower’ than what the Merseyside club offered.

An improved bid from Jose Mourinho’s side on August 9th was expected, which never came. It’s claimed Manchester United’s manager had a contact with Mina to convince him to move to Old Trafford, but the club’s offer for the player and Barcelona was ‘not at all convincing’. 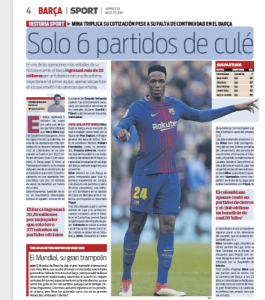 Lyon did try to match Everton’s offer, but Marco Silva transmitted confidence to the 23-year-old and with a better economic offer, he was convinced to join the Toffees over United and the Ligue 1 outfit.