Everton ‘want to bring’ Belgium manager Roberto Martínez back to the club, according to Het Laatste Nieuws.

The 48-year-old managed the Merseyside club between 2013 and 2016 before taking the Belgium job later that year. He is currently with De Rode Duivels, but has emerged as ‘one of the candidates’ for the Toffees, who sacked Rafael Benítez on Sunday.

Martínez has been approached by several clubs in England and Spain in the past, but was not tempted to leave Belgium. However, with Everton, ‘it is different’. Even though he was sacked at Goodison Park in 2016, the manager has an ‘emotional bond’ with the club. 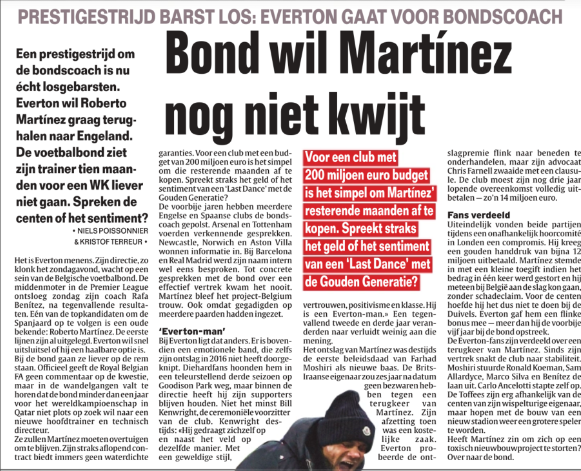 Everton are ‘serious’ about their old coach, and HLN add the Toffees are now ‘waiting for a signal’ from the Belgium FA and want a ‘quick decision’ on whether or not their former coach is a viable option for them.

The Belgium FA, for their part, have not made an official comment on Everton’s reported approach, but in the corridors of the association, there are suggestions that they don’t want to look for a new coach and technical director, less than a year before the World Cup.